Creative Biolabs, a global biotechnology company, provides the leading tool for live biotherapeutics research. Our reputation is based on our more than ten years of experience, attention to detail, and customer service. Our services include one-stop services for next-generation probiotics, such as isolation, screening, identification, and functional evaluation. There is no need to change providers when working with us.

Probiotics are an important factor affecting the oxidative status of the gut, exhibiting direct antioxidant properties and inducing intrinsic human signaling antioxidant defenses. Some probiotic bacteria demonstrate strong antioxidative potential. The mechanisms of antioxidant action of probiotics range from direct biochemical clearance of active substances to induction of signaling events leading to an increased ability of the host cytoprotective system. Because the antioxidant effects of probiotics vary significantly in type and detail, a wide selection of methods for evaluating these properties is required to identify, characterize, and develop novel probiotics for medical purposes, as well as to explain the mechanisms of action of probiotics already used in healthcare.

Mechanism of the Antioxidant Activity of Probiotics

Probiotics can act directly to neutralize oxidants by the expression of antioxidant enzymes. They can produce various metabolites with antioxidant activity, such as butyrate, glutathione (GSH), and folate. In the context of its antioxidant activity, the plasma lipid profile is another important factor modulated by probiotic supplementation. The exopolysaccharides which are released by probiotic bacteria potentially play a role in oxidative stress reduction. 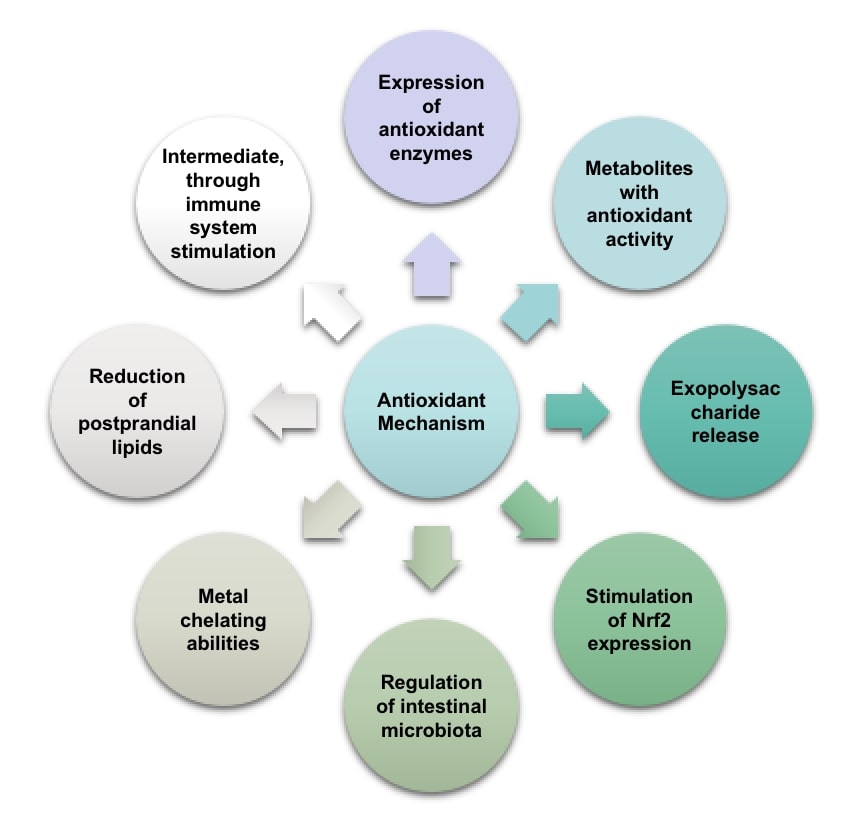 In Vitro Antioxidative Methods of Probiotics at Creative Biolabs

DPPH is usually used as a reagent to evaluate the free radical scavenging activity of antioxidants.

2,2′-azinobis (ethylbenzothiazoline 6-sulfonate) is oxidized by oxidants to its radical cation, ABTS-, which is intensely colored, and antioxidant capacity is measured as the ability of test compounds to decolorize the ABTS radical directly.

This method was employed to measure reducing power in plasma.

ORAC evaluates antioxidant inhibition of peroxy radical-induced oxidations and thus reflects the classical radical chain-breaking antioxidant activity by hydrogen atom transfer (HAT). The principle of this method is based on decreasing the intensity of fluorescent molecules such as β-phycoerythrin or fluorescein of the target along with time under the reproducible and constant flux of peroxy radicals.

To develop novel probiotic products with the potential to prevent oxidative stress, the search for probiotic strains that can most effectively prevent and alleviate oxidative stress needs to continue. Creative Biolabs' team of highly qualified and experienced technicians will work with you to develop and deliver antioxidant analysis solutions. We have the expertise to optimize every stage. Please feel free to contact us for more about antioxidant activity assays.