Modifying gut microbiota with probiotics has been in practice for centuries and is now being studied in the treatment and prophylaxis for cardiovascular disease (CVD). As a leading specialist in live biotherapeutics drug discovery, Creative Biolabs has developed a cutting-edge platform for the identification, characterization, and development of next-generation probiotics (NGPs). We are committed to providing overall solutions to facilitate our customers’ NGPs project development.

CVD is a major cause of death worldwide. There are disease-associated risks that can be either modifiable or unmodifiable factors and examples are low-density lipoprotein (LDL) cholesterol, increased triglyceride-rich lipoproteins, and low levels of high-density lipoprotein (HDL) cholesterol. An individual’s gene makeup, body composition, health, and having certain preexisting disease states can also influence their risk of having a CVD. These factors often contribute to a group of conditions leading to metabolic syndrome. Metabolic syndrome increases an individual’s chance of having CVD. 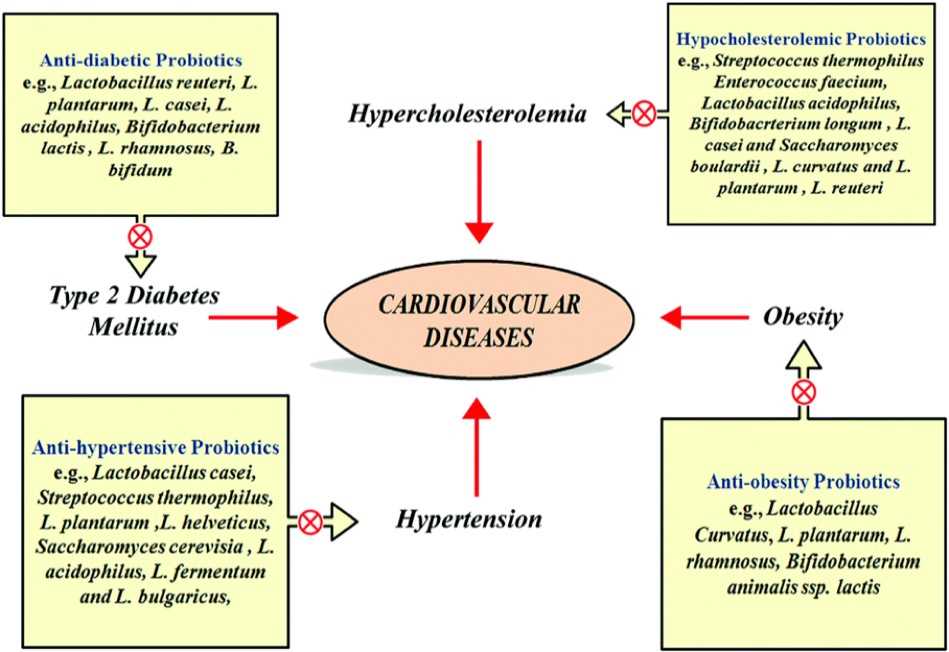 Fig.1 A schematic representation depicting the risk factors of CVD and the potential probiotic microorganisms that are reported to reduce the risk for each of these risk factors. (Thushara, 2016)

Potential of Probiotics for the Control of CVD

A meta-analysis of several studies found about 1100 bacteria species and their related properties to CVD. Studies have demonstrated that probiotics are involved in host immune modulation and influence the development and physiology of organs. They may aid in the fight against metabolic disorders which is based on them affecting the modulation of composition and function of interstitial microbiota. Current studies that have observed the gut microbiota in CVD, including hypertension and atherosclerosis.

Hypertension plays a major role in the development of CVDs and has been closely linked with stroke, ischemic heart disease, and heart failure. Recent scientific reports point out that probiotics and their metabolites can be exploited to manage hypertension via mechanisms such as improving total cholesterol and LDL-cholesterol levels, reducing blood glucose levels and insulin resistance, and regulating the renin-angiotensin system. Few studies have demonstrated that probiotics such as Lactobacillus casei, Streptococcus thermophilus, Lactobacillus plantarum, and L. helveticus significantly reduce systolic blood pressure (SBP).

Though cholesterol is an essential substance for cell function and integrity, increased levels of blood cholesterol over a long period may result in atherosclerosis, and is therefore considered a major risk for CVDs. After a pioneering study that reported the cholesterol-lowering effect of fermented milk containing a wild Lactobacillus strain, numerous studies have investigated the hypocholesterolemic effects of lactic acid bacteria (LAB), particularly strains of Lactobacillus and Bifidobacterium. Many subsequent studies have been successful in reproducing similar results, showing significant reductions in LDL and total cholesterol with probiotics consumption.

The change in gut microbe related to a disease state can often be associated with an individual’s diet. Diet modification to alter the composition of gut bacteria is vital for either prophylaxis or the treatment of some diseases. This makes modifying gut microbiota with probiotics a focus point in the prevention of unhealthy state and improvement to a healthy state to avoid CVD.

Multidisciplinary scientists at Creative Biolabs work together closely to address these scientific and technical challenges. We have perfected technical pipelines in the identification, characterization, and development of NGPs. Integrating advanced technologies with substantial expertise, we offer the most comprehensive services according to our clients' specific requirements. Please contact us for more information and a detailed quote.