With our state-of-the-art technology and industry-leading expertise, Creative Biolabs has developed an unparalleled platform for live biotherapeutics drug discovery service for a series of diseases such as CDI.

CDI is one of the most prevalent and significant bacterial causes of nosocomial infections. The clinical outcomes of CDI range from asymptomatic carrier state to mild diarrhea, usually self-limiting, diarrhoea, to fulminant colitis, pseudomembranous colitis, which can cause death. To date, the treatment of CDI almost exclusively involves the use of broad-spectrum antibiotics such as vancomycin and metronidazole. Although the diagnosis and therapy of CDI and prevention of the spread of C. difficile have been advanced development, CDI remains a significant challenge to healthcare systems worldwide.

Treatment of CDI with Probiotics

Probiotics are microorganisms that are believed to counteract disturbances in the intestinal flora and thereby reduce the risk for colonization by pathogenic bacteria. Given the important role that disturbances in the gut microbiota play in the CDI, probiotics could affect the microbiota and interfere with C. difficile. While there are questions about the design and execution of this study as well, there are reasons to hypothesize that probiotics are more efficacious in primary CDI prevention than in secondary prevention. There is moderate evidence on the probiotics that act at different levels to prevent CDI to inhibit colonization and reduce the likelihood of and/or prevent the development of CDI. The accumulating data from clinical trials also suggest that probiotics are efficient at preventing recurrences in those with recurrent disease.

A variety of bacteria have been studied to explore their probiotic efficacy against CDI either as single probiotic agents or in combination with other agents. These agents include but not limited to: 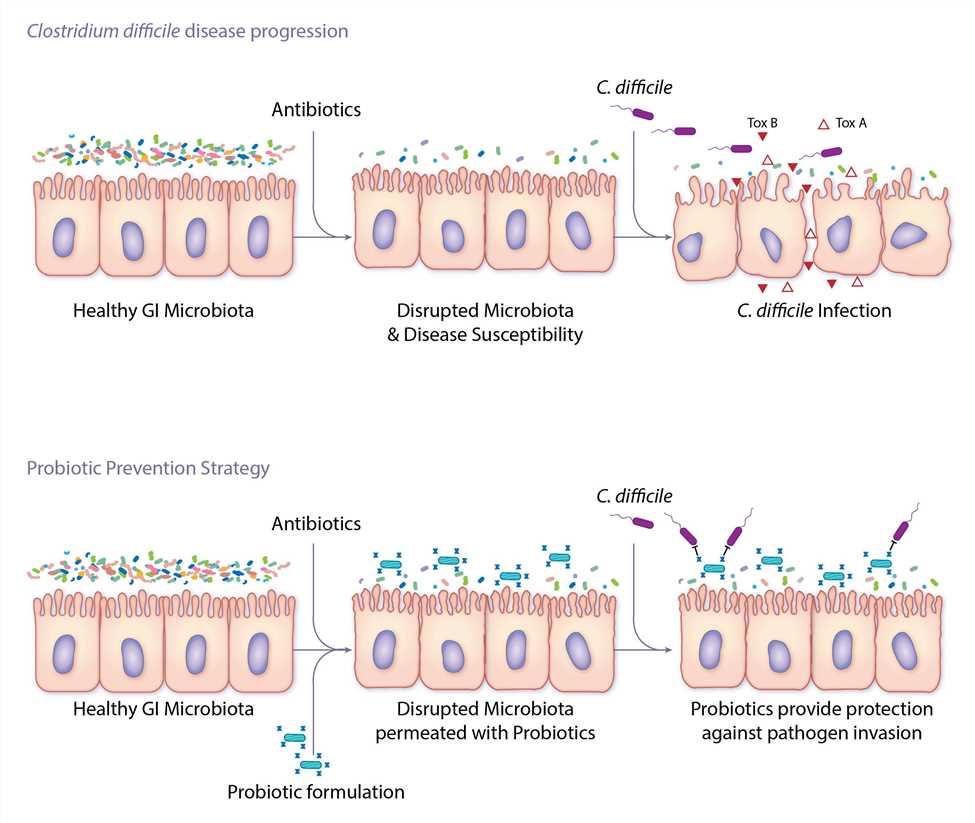 Among them, L. rhamnosus GG is one of the best-characterized probiotics for effective therapy of CDI. Previous experience and trials currently underway suggest that the treatment of L. rhamnosus GG in the CDI patients leads to less diarrhea and early symptomatic improvement, compared with those treated with placebo. Other Lactobacillus species have also been studied for the prevention of CDI. In recent clinical trials of CDI, a probiotic mixture that includes L. acidophilus and L. casei has been studied and may have great efficacy in the prevention of CDI in high-risk antibiotic recipients.

Probiotics are used to prevent or treat CDI function through multiple possible mechanisms potentially. Creative Biolabs is committed to providing overall solutions for probiotic drug discovery, focusing on innovative research and development of probiotics industrialization. Our team has extensive experience in probiotic drug development and currently can provide accurate and effective solutions for CDI for our global customers all over the world.

Based on our advanced platform, Creative Biolabs could now offer drug discovery service to provide evidence that probiotics have potential as prophylactics in the prevention of CDI. If there are any questions, please do not hesitate to contact us for more information.