Bifidobacterium adolescentis as Next Generation Probiotics

Bifidobacterium adolescentis as Next Generation Probiotics

Two types of bifidobacterium are predominant in the intestinal tract of healthy adults, Bifidobacterium adolescentis (B. adolescentis) and Bifidobacterium longum (B. longum). B. adolescentis is a true symbiote that does not promote systemic or intestinal inflammation in a healthy state. However, it does have potent immunomodulatory properties in diseased states that can attenuate the inflammatory host response to intestinal injury and pathogen invasion. It could be a good candidate for a live biotherapeutic product (LBP). Creative Biolabs’ reliable LBP development services minimize your risk and timeline, maximize the performance of your cell line, and save your resources.

Introduction of B. adolescentis

B. adolescentis are normal inhabitants of healthy human and animal intestinal tracts. Intestinal colonization of B. adolescentis occurs immediately after birth. Their numbers in the gut tend to remain relatively stable until late adulthood, where factors such as diet, stress and antibiotics cause them to decline. The genome of B. adolescentis averages 2.1 Mbp in length. Its shape is either an elongated, thin irregular rod-, Y- or V-shape. B. adolescentis contains one circular chromosome. It is a Gram-positive organism that contains a cell membrane and does not move.

B. adolescentis for Disease Treatment

The immunomodulatory potential of B. adolescentis promotes differentiation of Treg and inhibits Th2 response. It alters the colonization of gut microbes by increasing the proportion of Lactobacillus, which is positively correlated with increased propionic acid production. This bacterium also demonstrated immunomodulatory activity through stimulated secretion of Th1 type cytokines from mouse macrophages. B. adolescentis not only inhibits the growth of Candida albicans, but also eliminates adherent invasive Escherichia coli by inducing the killing activity of human macrophages, showing immune stimulation. 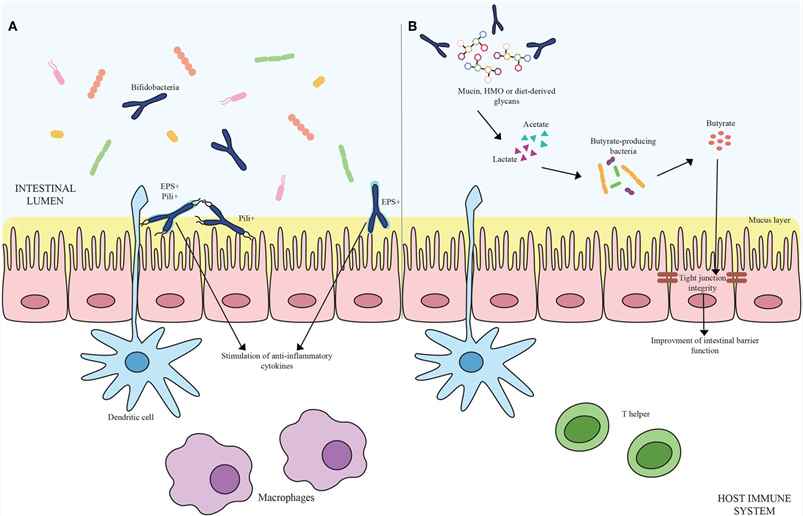 Probiotics has widely been explored for their role in the gut-brain axis to deal with psychological disorders. Gamma aminobutyric acid (GABA) is the principal inhibitory neurotransmitter playing a key role in anxiety and depression disorders in mammals, which is produced by bifidobacterial strains. B. adolescentis represents a model GABA producer in the human gastrointestinal tract. In an in vivo study of Groningen rats, supplementation with B. adolescentis PRL2019 and B. adolescentis HD17T2H confirmed that these probiotics stimulated GABA production in vivo. In the mice model, B. adolescentis exhibited anxiolytic and antidepressant effects, which were related to the reduction in inflammatory cytokines and rebalancing of the gut microbiota. Therefore, Bifidobacterium preparations containing probiotics may be developed for the treatment of psychological disorders.

What Services Can We Provide for B. adolescentis at Creative Biolabs?

As a leading LBP development solutions provider, Creative Biolabs has a proprietary technology platform and an international network to provide our clients with solutions and applications for LBP. We have experience in the development of a variety of probiotics, including B. adolescentis. If you are interested in our B. adolescentis related services and products, please contact us for further discussion.