Systemic lupus erythematosus (SLE) is a chronic autoimmune that has disease adverse effects of conventional therapies and the occurrence of refractory disease. Recent reports have shown that manipulation of the gut microbiota may lead to the development of novel therapies in SLE patients, thus next-generation probiotics (NGPs) may help with SLE treatment. As an industry-leading company in the development of NGPs, Creative Biolabs has extensive experience in NGPs research and established an advanced technology platform to provide global researchers with high-quality NGPs development services.

SLE is a chronic autoimmune disease characterized by abnormally functioning B lymphocytes, which promote an exacerbated production of autoantibodies that trigger the formation and deposition of immune complexes that damage many organs and tissues. While the causes are not known, it is widely considered that SLE is the consequence of the effects of environmental factors in genetically predisposed individuals, leading to the disruption of self-tolerance and the activation/increase in innate immune cells and autoreactive lymphocytes. Despite therapeutic advancements, SLE continues to associate with poor outcomes. The heterogeneous, relapsing, and remitting nature of the disease, the toxicities of current regimens, damage accrual, and the unchanged mortality (despite therapeutic advances) mean that the search for new, effective, and targeted drugs is of paramount importance. The gut microbiota may play a role in SLE as demonstrated in mice and humans. Thus NGPs treatment has been focused as a new possible therapy approach for SLE. 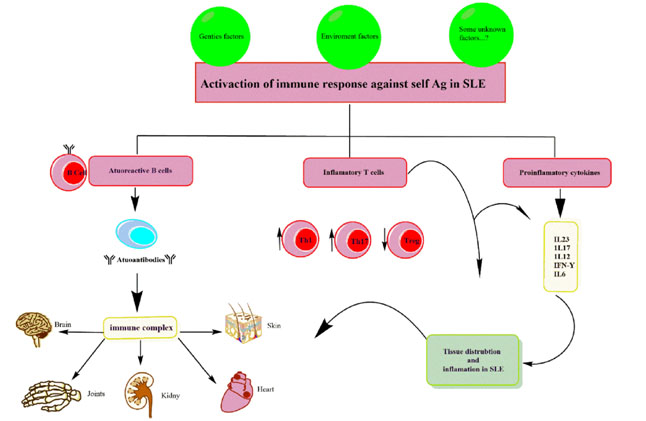 Nowadays, the treatment and management of SLE are primarily based on non-steroidal anti-inflammatory drugs, glucocorticoids, hydroxychloroquine, and immunosuppressive agents. SLE management is challenging because of the adverse effects of conventional therapies and the occurrence of refractory disease. In fact, corticosteroids and azathioprine therapies have been associated with an increased rate of CVD in lupus patients. Recent studies have shown that manipulation of the gut microbiota may lead to the development of novel therapies in SLE patients. In this way, probiotics with immune-modulatory properties in the development of renal and cardiovascular disease on patients as novel therapies have been closely watched.

Dendritic cells exposed to SLE microbiota enriched with Bifidobacterium bifidum LMG13195 tended to, when co-cultured with naïve T cells, lessen the activation of these lymphocytes when compared to normal SLE microbiota in vitro. In the same conditions but using Ruminococcus obeum DSM25238 and Blautia coccoides DSM935 instead of the Bifidobacterium strain, after recovering the T cells resulting from the co-incubation, decreased Th17/Th1 ratios were observed, changing the inflammation pattern when compared to normal SLE microbiota.

The administration of the probiotic Lactobacillus delbrueckii subsp. Lactis PTCC 1743 to a pristane-induced SLE mice model was able to improve the disease symptoms, decreasing Th17 populations and the expression of one of its main cytokines, IL-17a, well known as crucial elements in the development and maintenance of inflammation.

Lactobacillus rhamnosus showed the capacity to modulate retinoic acid receptor-related orphan receptor gamma (ROR), a transcription factor involved in the maturation of Th17 lymphocytes, which would explain the ability to decrease this lymphocytic population.

Lactobacillus reuteri GMNL 263 displayed a different pathway in the genetic murine model of SLE NZB/WF1. This microorganism can increase Treg lymphocyte expression and its transcription factor forkhead box P3 (FoxP3) levels. Aside from this, levels in common pathogen-associated molecular pattern (or PAMPs) receptors such as TLR-4, TLR-5, TLR-7, and TLR-9 that mediate in the development of inflammation were also reduced in the liver with the probiotic treatment, as well as an increase in antioxidant activity.

Creative Biolabs has been committed to the study of NGPs for years. Our excellent scientists specialized in NGP development have accomplished hundreds of relative projects and we are confident in providing high-quality services to global researchers. Our services include but not limited to: